Australian base malt, English and German specialty malts balance the burst of citrus/pine
hop aroma and flavour strongly influenced by generous use of US Centennial and US Citra
late in the Whirlpool and in dry hop. A brilliant light-golden colour, Murray’s Angry Man Pale Ale has a full-bodied finish and complex character.

A light clean refreshing ale that has been a part of the Murray’s core range for over a decade. Golden straw in colour with a smooth creamy mouth feel and a light dry finish. Perfect summer drinking .

Murray’s Grand Cru is a hybrid of the Belgian Trippel and Golden Strong Ale styles. Made with authentic Belgian yeast, this highly awarded beer pours a pale straw colour with a fluffy white head. Hints of banana, backed with the dry-hopped spiciness of Nelson Sauvin hops dominate the aroma and flavour. This is balanced by silky malt flavours, finishing with a mellow bitterness. Murray’s Grand Cru is a sophisticated, ‘out-there’ beer – their interpretation of two classic beer styles from one of the world’s greatest brewing nations, Belgium.

Fred is aggressively hoped throughout the brewing process to deliver our interpretation of a classic US west coast style IPA. Classic American Citra and Amarillo hops dominate the aroma. The bold hop character is balanced with a selection of German and British specialty malts to deliver a well-rounded and surprisingly moreish full on beer experience. 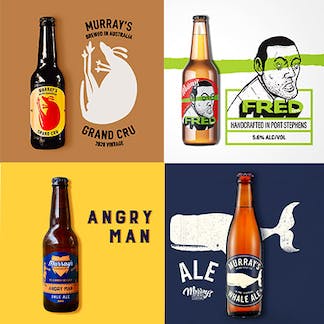